At first glance, french bulldogs and pugs look very similar. So similar, in fact, that someone who is not very familiar with either breed will mistake one for the other quite easily and you can’t blame them.

With their small size, short snouts, their playful and friendly personalities, you may think that French Bulldogs and Pugs are related, but are they?

This also makes them very interesting, because how can two dogs that look and act this similar not be related? To understand, we have to dig deeper into the characteristics, personalities, and history of both breeds.

Although French Bulldogs and pugs may look similar from afar, I assure you that they are completely different dogs, although they do share some similarities that are worth mentioning before we get into the differences.

Before we discuss the differences, though, we should talk about their similarities for a bit.

10 Similarities of French Bulldogs and Pugs

Here are the 10 most obvious ways French Bulldogs and Pugs are indeed very similar:

You can learn more about your Bulldog’s head and why it’s called that here.

Now that we’ve discussed their similarities, it’s time to get to all the ways that make them very different dogs that truly come from different worlds.

A Break Down The differences between of French Bulldogs VS Pugs

In order to understand truly how different these two dogs are, we need to look at each category on its own, so let’s break them down.

French Bulldogs can at the most ideal conditions live up to 18 years if they get the best care possible, but the average lifespan of French bulldogs is actually just 10 to 12 years old.

Pugs have a longer lifespan on average than French Bulldogs as the average lifespan of pugs is actually 12 to 15 years old, and the oldest recorded living pug lived to be 27 years old.

The average healthy male french bulldog can weigh 20 to 28 pounds, and they normally stand at 11 to 13 inches tall. Female French Bulldogs can weigh about 17 to 24 pounds and stand at the same height as their male counterparts.

The average healthy Pug weighs 14 to 18 pounds for both males and females, and they stand at 10 to 14 inches tall at the shoulder.

This means that French Bulldogs are larger and heavier than Pugs by a good margin.

By the way, if you think your Frenchie doesn’t meet those averages, you can check out why your Frenchie may be taller than normal here.

Although Frenchies and pugs may look similar from afar due to their small size and short snouts, they are easily distinguishable from closer. They both still have protruding eyes, but that’s where the similarities end.

You will notice that while pugs have floppy ears that are down, most Frenchies have what are called “bat ears” that stand up. Frenchies also come in more colors than pugs. Pugs come in fawn, apricot, black, and silver fawn colors, while Frenchies come in more than 16 colors including black, fawn, white, brindle, cream, and different combinations of all those colors.

As for the coats, Frenchies have a fine, fair, and short coat that doesn’t shed much, if at all, and has little to no odor. Pugs, on the other hand, have a double coat (like the one you find in winter breeds like Labs and Goldens) that sheds quite a lot, particularly in the summer.

However, both breeds are still very prone to cold and hot weather as their coats don’t provide the protection that the thick coats of other breeds provide them.

For the tails, Frenchies come with stumpy, small, and either straight or screwed tails that will sit low over their rectum. Pugs have small, tightly curled tails and don’t have as many tail issues as French Bulldogs do.

The reason I can tell you with confidence that French Bulldogs and Pugs are not related is because of their history which is very different.

French Bulldogs originated in England to be a toy-sized version of the bulldog, which was used as bait for bulls then as fighting dogs. French Bulldogs started their work as excellent ratters (rat hunters) then quickly became popular among the lace workers in Nottingham who took the dog with them to France when they moved to look for opportunities.

There, the French Bulldog got its name due to the instant and immense popularity it had in Paris and other French cities. Small business owners found the small dog to be fierce enough to work as guard dogs without being as cumbersome as it didn’t take much space or resources from the business to keep.

But the real popularity of Frenchies was with women of the night who absolutely loved the dog who kept them safe during their work at night while also being small enough that they can take with them everywhere they go.

The history of the pug is much different (and nobler) than that of the French Bulldog. Pugs originated in China, with historians claiming evidence of their existence as far as 400 B.C. They were the noble breed of wealthy families in the country.

The pug was imported in the 16th century to Europe where it became popular with the nobility and wealthy there as well, and it even went on to become a Queen Victoria royal family favorite.

Both French Bulldogs and Pugs can be great companions and great family dogs, but their temperaments can be quite different.

While both dogs are friendly and laid back, French Bulldogs tend to be more stubborn and independent than Pugs. Pugs, on the other hand, are less stubborn but can also be quite needy and require more of your attention than Frenchies.

French Bulldogs require minimal grooming, but the same can’t be said about Pugs. Pugs are heavy shedders, so you will need to brush them daily while this is not required for Frenchies. You will also need to deal with the Pug’s seasonal shedding which can be quite a lot, while Frenchies shed very little and don’t shed seasonally.

Overall, grooming a French Bulldog takes a lot less than grooming a Pug.

Conclusion: Should I get a French Bulldog or a Pug?

You should get a French Bulldog if you are looking for a dog that’s friendly and easy-going and don’t mind the expenses as Frenchies can be more expensive to get and take care of than Pugs. If you want a dog that is smaller than Frenchies and with fewer health problems and you don’t mind the shedding, the pug is the better dog for you.

What dogs are related to French Bulldogs?

Are Bulldogs and Pugs Related?

From Brothels to Royals: The Complicated Past of The French Bulldog

History of the Pug

Things you didn’t know about the pug

We would like to remind you that all dogs are good dogs and that instead of buying an expensive dog, you should consider saving a life by rescuing a dog from your local shelter or rescue. 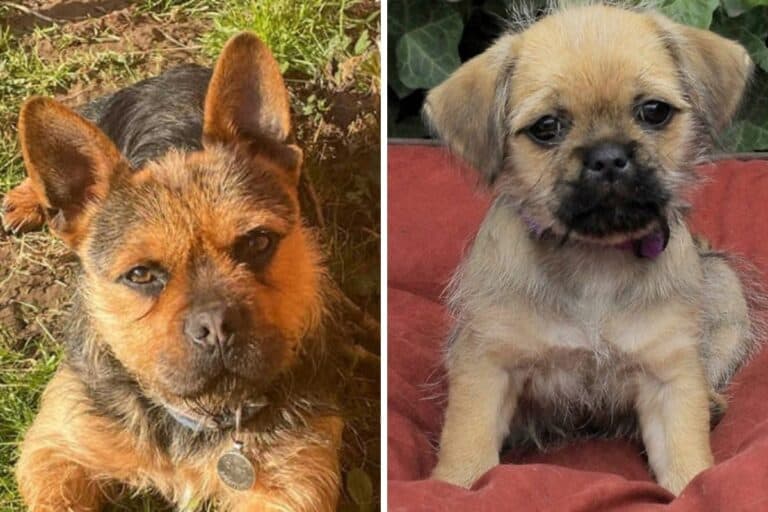 The French bulldog Yorkie hybrid is a cross between the French Bulldog and the Yorkshire terrier, two smaller breeds. Each breed and kind of dog has distinct features that distinguish…