Have you ever imagined a French Bulldog with a long tail? Honestly, I did and wondered whether French Bulldogs are actually born with or without tails and if Frenchies’ tails are docked for cosmetic or health reasons.

So, are French Bulldogs Born with Tails? French bulldogs are born with tails, just like all breeds, they just have a different-looking type of tails that is either straight down and stumpy, screwed, or thick root with a very fine tip. Unfortunately, this sometimes causes malformation and instability in the spinal column.

Continue reading this article to know the truth behind the french bulldog tail and tail docking.

Are French Bulldogs born with tails?

French Bulldogs are born with tails; Unlike other breeds, Frenchies have short, stumpy tails that sometimes appear docked. Instead of having long tails, they have screw-shaped tails, some with little curves, and others that are quite short and straight.

Although they sometimes go unnoticeable, Frenchies actually have short tails, yet these cute little tails are both a blessing and a curse; Frenchies develop hemivertebrae usually by the time they are 9 months old.

It’s when their spine takes on its ultimate form. Hemivertebra is a minor instance of malformation involving only one or two vertebrae with no clinical symptoms in the dog. In certain circumstances, the disease might progress to the point that the dog’s ability to function is jeopardized.

How does a natural French Bulldog Tail look like?

In comparison to other dog breeds, French bulldogs have short tails. The tails of Frenchies are available in a variety of forms. Stumpy tails, straight tails, straight down and stumpy, screwed, and even a broad root with a fine tip-type tail are all possibilities.

“The tail is either straight or twisted (but not curly), short, hanging low, broad root and fine tip; held low in repose,” according to the AKC’s French Bulldog breed standard. The criterion for a French bulldog tail is that it should cover the anus and not be able to rise beyond the horizontal.

Do French Bulldogs Tails cause them health problems?

French Bulldog Tails cause then health problems; the most common issue is Hemivertebrae which is the improper development of the wedge of the spine resulting in a twisted tail; Hemivertebrae appears when the puppy is nine months old or older.

While their adorable little Frenchie tails are endearing, they are prone to developing tail problems. Their short, compact bodies are particularly vulnerable to these problems. While certain French Bulldogs are predisposed to these problems, improper breeding methods can increase the risk.

Hemivertebrae is one problem, and French Bulldog tail pocket infection is another. Let us take a closer look at these two concerns. The vertebrae of the French Bulldog spine become distorted, resulting in hemivertebrae. This is a birth defect. During development, the vertebrae fuse and develop improperly.

This results in a twisted wedge of a spine rather than a highly straight spine. Hemivertebrae can also cause a twisting of the French Bulldog’s spinal cord. Your Frenchie’s central nervous system may be harmed as a result of the twisting and compression.

The distinctive “screw tail” of some French Bulldogs is due to hemivertebrae. Because the tail lacks a spinal cord, this is less of a concern.

However, other than the tail, other faulty vertebrae may be impacted, which might create difficulties.

This problem in French Bulldog puppies generally appears during the ninth month of life. Your Frenchie’s spine will fully grow at this age, and this issue will fully appear. Hemivertebra may range in severity from minor to severe. Only one or two vertebrae may be impacted if the condition is modest. It might have a significant influence on the French Bulldog’s capacity to operate in daily life in extreme situations.

Are French Bulldogs docked or cut off?

French Bulldog tails are not docked or cut off; French Bulldogs, along with various other breeds are born with an extremely short tail; their tails are tiny and stumpy. Some are screw-shaped, others have little bends, while yet others are short and straight. The tail is an unintended result of early breeding.

The tails of Frenchies are neither docked nor chopped off. However, there have been allegations that certain breeders or dog show owners have resorted to a little “customization” on occasion.

Despite the fact that the dog was born with a short, stumpy tail.

Apparently, appearance is paramount for people who exhibit their dogs, and they have been known to cut the tail even shorter or “tidy” it up from its natural, adorable appearance.

It’s simple to determine whether this has happened, and here’s a test you can conduct on any dog to see if the tail has been docked.

The tip of the dog’s tail is all you can feel. If the final tail bone isn’t pointed, it’s likely that a section of the tail was cut off and removed.

Why are Dogs’ tails docked or cut off?

Dogs used to chop their tails off to protect themselves against rabies in the past.

Later in history, it became fashionable to detach the tail ends of hunting dogs in order to protect them from injury.

According to a 2010 study, 13.5 percent of working dogs have a tail injury each year. Assuming that the dog with the shortest tail is less likely to get an injury.

In today’s world, many individuals choose to dock their dog’s tail for aesthetic or functional reasons.

Docking the tail can be done in a variety of ways, including wrapping a rubber band around it to stop the flow of blood. After a few days, the tail will fall off.

It can also be done by a veterinarian, which you’d assume would be far safer and result in a lower risk of infection.

Neither treatment, however, requires anesthesia or sutures.

Does docking your dog’s tail hurt them?

Tail docking supporters argue that a puppy’s nervous system is not yet matured enough to allow them to experience discomfort.

There have been studies that demonstrate that even if a dog’s pain cannot be quantified, it would still inflict suffering. Dogs feel pain in their tails from a very young age, similar to all the other parts of their body.

Cutting through muscles, tendons, up to seven pairs of very sensitive nerves, and destroying bone and cartilage connections are all involved in docking a puppy’s tail.

Puppies make repeated screaming vocalizations after their tails are cut off and when the incision is stitched, suggesting that they are in a lot of pain.

While the incision heals, inflammation and tissue damage create chronic discomfort. This needless operation also comes with the danger of infection and other consequences.

Tail docking can also cause the dog to suffer from needless and preventable long-term chronic discomfort and suffering. This can play a big role in the dog’s temperament and behavior later in their lives and may be a contributing factor to them becoming stubborn or even aggressive.

Should French Bulldogs’ tails be docked?

French Bulldogs’ tails should not be docked off; this procedure is typically carried out for cosmetic reasons and in few cases for medical reasons. Tail docking cause discomfort to the dog and takes away a form of expression that is vital to dogs.

Some breeds may have their tails docked because they believe their non-working members are exposed to the same hazards as working dogs; more frequently, though, it is done to adhere to a specific breed look or standard.

Pet dogs’ tails should not be docked as a preventative measure. Therefore, until proof to the contrary exists, tail docking of non-working dogs has been deemed a cosmetic surgery, even though their breed was originally designed for working purposes.

All breeds of dogs should be barred from having their tails docked unless it is done by a veterinary specialist for medical reasons (eg injury).

Tail docking causes unneeded discomfort to puppies and deprives them of a key form of canine expression later in life.

What are the laws on Dog Tail Docking?

Below is a list of all the status of dog tail docking in most countries, some countries completely banned docking by law, others restrict it, meaning it cannot be done except under certain circumstances, and other countries don’t restrict it at all.

Now that you know that tail docking is bordering on abuse, you should spread the word as an educated community is the best way to fight it. You can talk to your colleagues, friends, and family about it or share this article with them.

And while we’re on the topic of ‘cosmetic adjustments’ to dogs that should not be made, you should also check why some french bulldogs have floppy ears here and their easy (ethical & humane) fixes.

Are French Bulldogs born without tails?

French Bulldogs are born with tails; Long tails are not a natural feature of French Bulldogs. They’ve been genetically modified to have short, stumpy tails. Various French Bulldogs have a range of tail shapes, including curled tails, screw-shaped tails, and even very short and straight tails.

Do purebred French Bulldogs have tails?

Purebred French Bulldogs have tails; Frenchies are born with very short tails. This trait is part of the breed’s personality. one of their gene mutations causes their tails to grow exceptionally short. They’ve been genetically modified over the years to have short, stumpy tails.

Why do they cut the tails off French Bulldogs?

They cut the tails of French bulldogs for cosmetic reasons in most cases, back in the day it was for their working role; As the French bulldog’s role as a working dog has shifted, it has become part of their aesthetic appeal, and selective breeding has allowed them to have shorter and shorter tails.

Cosmetic tail docking: an overview of abuse and report of an interesting case

What are the animal welfare issues with docking dogs’ tails? 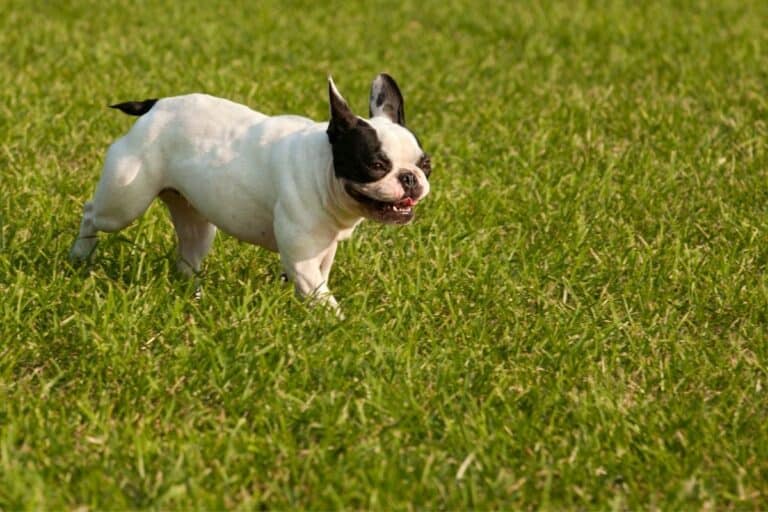