French Bulldogs are one of the most popular pet breeds today, thanks to their distinct appearance and charming size, and not to mention, their wonderful personalities. Most people are unaware that having more Frenchies around is a challenging task owing to the difficulties of mating and breeding them.

Continue reading this article to know all about french bulldogs breeding, how they mate, how they give birth, and how the whole Frenchie breeding process works.

Can French Bulldogs Get Other Dogs Pregnant?

French Bulldogs have a distinctive body, with features that make them different yet puts them at risk of many health issues, including while mating. In order to mate, Frenchies usually require artificial insemination. mating is tough for them because of their small hips.

One of the primary reasons why spontaneous births are so uncommon is because of this anatomical characteristic.

Artificial insemination is a method of getting a female dog pregnant without having sexual contact with another dog of the same gender.

Before the rest of the procedure, the male dog’s sperm is extracted and tested before being implanted into the female reproductive organ.

Because of the manner they were bred, Bulldogs are unable to reproduce on their own. Short legs, a compact physique, and narrow hips are the outcome of this.

The male bulldog is unable to successfully mount the female in order to procreate.

Not only that, but Frenchies face complications during giving birth as well; The hips and skulls of French Bulldogs are narrow. Puppies are in danger of being trapped in the birth canal as a result of this (dystocia). This can result in painful labor, with the danger of both the pups and the mother dying.

Frenchies will deliver by C-section in the majority of instances, but there will be outliers.

Natural labor is possible for your French Bulldog, but it is extremely unusual, accounting for just 20% of all pregnancies in French Bulldogs. Natural deliveries have some hazards, such as pups being trapped in the delivery canal.

Purebred French Bulldogs are a man-made dog breed since they are highly specialized and meticulously bred. This is not a dog breed that could have existed without the intervention of humans.

This includes not just the general shape of the Frenchie body, but also the “survival of the fittest” idea.

You’ll find that puppies’ heads and chests may often become trapped in the delivery canal, producing lengthy and difficult labor for mom, and often problems that emerge from that very same long and painful labor.

If the female Frenchie gives birth naturally, she is in grave danger. Due to the small birth canals, the puppies are also at risk of dying.

Cesarean sections are used to deliver 80 percent of French Bulldog puppies. Vaginal deliveries are extremely uncommon in French Bulldogs, and they pose a risk to both the mother and the puppies.

In the United States, a Frenchie cesarean section costs between $600 and $2,000. Due to the popularity of the breed and the particular expertise and experience required by vets to effectively execute the surgery, the cost for French Bulldogs is likely to be on the higher end.

Bulldogs can’t breed naturally, they have a tough time reproducing on their own. They are unable to mate and reproduce without the assistance of humans due to the way they have been bred; with short legs, a compact physique, and narrow hips, the male is unable to mate the female in order to breed.

You can’t get a male and a female bulldog to procreate on their own, no matter how hard you try. For bulldogs, reproduction does not function like that. Only artificial insemination will allow them to reproduce. All you have to do now is look up the characteristics of the male dog breed from which you want the sperm to come. Breeders can also provide you with frozen sperm.

Because of the manner, they were bred, Bulldogs are unable to reproduce on their own. Short legs, a compact physique, and narrow hips are the outcome of this. The male bulldog is unable to successfully mount the female in order to procreate.

It’s not unheard of, and there have been cases where two bulldogs have successfully reproduced spontaneously and independently, but it’s exceedingly uncommon.

How The Breeding of French Bulldogs actually works

Natural mating is the most successful and cost-effective approach to generate a litter of puppies for the majority of dog breeds. For French bulldogs, this is not a scenario.

The hips and head of a French bulldog are exceptionally tiny. This makes the normal mounting of the female quite difficult for the male.

Artificial insemination is the most successful and safe method of producing French bulldogs.

Artificial insemination is a method of getting a female dog pregnant without having sexual contact with another dog of the same gender. Before the rest of the procedure, the male dog’s sperm is extracted and tested before being implanted into the female reproductive organ.

The sperm will fertilize the female egg, which will result in the development of an embryo.

However, you should have your Frenchie’s AI performed by a professional veterinarian or an experienced breeder since there are a number of processes that must be completed before the AI can be completed successfully. Aside from assessing the sperm, you’ll need to know when the optimum time is to execute the operation on the female French Bulldog.

When performed by a Veterinarian or a specifically recognizable technician, AI on French Bulldogs is known to produce no side effects or have any negative health impact. These skills will avoid complications or adverse effects, as well as stress or risks of welfare infringement towards the Frenchie, especially the female. Artificial insemination, in reality, offers certain health benefits, such as preventing the transmission of sexually transmitted illnesses.

When it comes to pregnancy length, French bulldogs are just like any other dog breed. The duration of this phase should be between 58 and 68 days. From the moment of conception, the typical pregnancy lasts around 63 days. In all, this will take roughly two months.

Your dam may stop eating or have a diminished appetite a few days before giving birth. She may also begin to construct a “nest” in which she intends to raise her puppies.

She will start the first stage of labor around 24 hours after her fever lowers when her cervix dilates and opens the birth canal to allow the pups to pass through.

She will pant, strain, and look restless at this time. Her body temperature may drop to 99 degrees or lower in the minutes leading up to delivery. This stage is then followed by abdominal straining and birthing.

As mentioned above natural birth is not recommended for French Bulldogs due to their breathing difficulties and small hips coupled with larger puppy heads.

When mating a French bulldog, the number of pups you may expect in the litter will range from 3 to 5. There are relatively unusual occasions where French bulldogs have delivered as high as 7 pups.

French bulldogs are tiny dogs by nature. As a result, a lower litter size would result in better circumstances for the puppies in the womb.

How long does a French Bulldog stay pregnant?

French Bulldogs stay pregnant between 58 and 68 days. When it comes to pregnancy length, French bulldogs are just like any other dog breed. The duration of this phase should be around 63 days. From the moment of conception, the typical pregnancy will take roughly two months.

How do I know if my French Bulldog is pregnant?

You know that your french bulldog is pregnant if she displays signs like having less activity,  getting tired easily, spending more time napping, changes in appetite, unusual behavior, enlarged or discolored Nipples, weight gain, enlarged abdomen, and nesting behaviors. 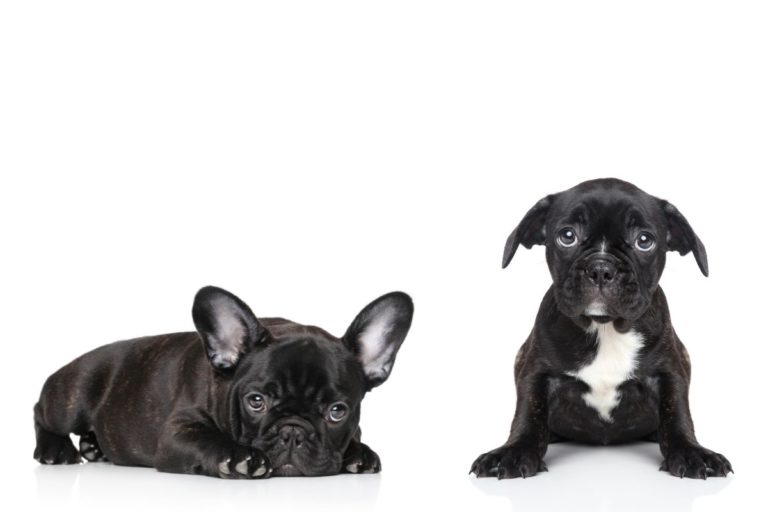