French Bulldogs’ features make this breed unique such as their small noses, cute round eyes, and lovely ears. However, people always wonder if French Bulldogs have bat or rose ears since they can often be seen with either of them, which often confuses most French Bulldogs lovers.

Continue reading to learn more about French Bulldogs’ bat ears vs rose ears and what you can know about your Frenchie from their ears.

Let’s start by comparing bat and rose ears, so you can fully know the difference between the two of them.

Rose ears are folded back, so you can see a part inside their ears that looks like rose petals, and you can see it on breeds such as greyhounds, Australian Shepherds, Bulldogs, Collies, and pugs. Also, rose ears can increase the risk of some health issues because they are prone to developing infections since the bacteria, moisture, and dirt can get trapped in the ear canal.

On the other hand, bat ears are large and fully upright, making a v-shape on their heads, dogs with bat ears can hear better than dogs with rose ears.

At the very beginning of French Bulldogs, they can be seen with rose ears until the American breeders found it a disqualifying characteristic for a French Bulldog to have rose ears.

So, when American Kennel Club started to put the breed standard, they decided that bat ears were the standard for French Bulldogs.

So any French Bulldog with rose ears will not be considered a purebred, so technically, you can still find Frenchies with rose ears, but they will be disqualified from the AKC and can’t participate in any dog show.

French Bulldogs are not born with rose ears; they are born with floppy ears that turn to bat ears as they mature. So, in other words, they are born with bat ears, but their ears didn’t reach the final form yet, it usually takes a few weeks for their ears to go straight up, but it depends on how fast your Frenchie is maturing.

What Are Pros And Cons Of Bat Ears For French Bulldogs?

Now, let’s discuss the pros and cons of bat ears for Frenchies.

There is one con; people seem to be more frightened of dogs with bat or upright ears; however, all dogs are friendly and lovable with the right dog owners.

What Can You Know About Your Frenchie From Their Ears?

You can know a lot about your Frenchie from their ears; your French Bulldog can’t reach out to you to tell you how they feel.

However, they will let you know with their body language, and all you need to do is pay attention to them; you can know whether your dog is scared, happy, or even in pain just by noticing the changes in your dog.

So here is everything you need to know about the little changes in your Frenchie’s ears.

How To Clean Your French Bulldog’s Bat Ears?

Here is a step-by-step guide to help you correctly clean your French Bulldog’s bat ears to prevent bacteria or infection.

Here is a video that shows how to clean dog Ears:

How Often Should You Clean French Bulldog Ears?

You should clean your French Bulldog’s ears at least once a month; after every bath, you should at least wipe their ears gently with a cotton ball; also, make sure to check inside their ears every week for any redness odor or any indication for ear infection.

If you liked this article and found it helpful, you can share it with your friends and family; it may also be useful to them. Also, if you have any questions about your pup, please, don’t hesitate to contact us.

At What Age Do French Bulldogs Ears Stand Up?

French Bulldogs’ ears stand up around five weeks, and they can be as late as fifteen weeks old. It can vary from one dog to another; however, it’s only a matter of time; they won’t have floppy ears forever.

Why Does My French Bulldog Have Pointed Ears?

Most French bulldogs have pointed ears or known as bat ears, but they are born with floppy ears that go up as they mature; your puppy will have floppy from five to fifteen weeks; however, they can take more time than that because it varies from one puppy to another.

How to Tell What Kind Of Ears Your Puppy Will Have?

What Dog Breeds Have Bat Ears?

Here is a list of dogs with bat ears:

What Dog Breeds Has Rose Ears?

Here is a list of dogs with rose ears: 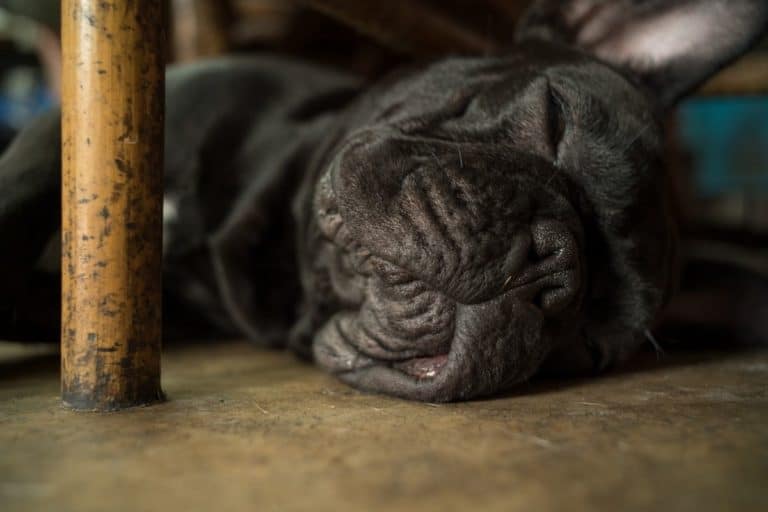 English Bulldogs can get too attached to their owners, and they often require constant attention and stimulation.   If you have an English Bulldog and don’t have enough time to give…