No doubt, all owners want their French Bulldog to have healthy purebred puppies. The best way to do that is to enhance the dog’s genes by mating it with a stud.

Keep reading to learn more about what a stud is, what to look for when choosing a stud, and how to stud your French Bulldog.

What Is A Stud?

A stud is a term used to refer to male dogs that are solely used for breeding. These dogs come from a high-quality pure bloodline and carry healthy genes to ensure that the offspring will also turn out to be pure and healthy.

Should You Even Stud Your Dog?

If your dog is healthy and sexually mature enough to go through the mating process, and this is what you want, then yes, you should stud your dog.

However, you will need to consider the reason why you want to stud your dog, whether you’re doing it to enhance the genes of the puppies so you can keep them or because you want to sell the puppies for a high price and start a breeding business.

For example, a lot of people that go through the process of turning their French Bulldogs into studs in the first place do it to sell their sperm, and you might be shocked to learn the insane prices for French Bulldog Sperm, but this process comes with its own risks.

Regardless of the reasons, the most important thing is to choose the right stud to mate your dog with.

What to Do Before Studding Your Dog?

There are some key factors you need to keep in mind before studding your dog. Let’s discuss them in more detail:

Here’s a list of the main features that you need to find in a stud:

Although this is a very important factor, many breeders don’t give it enough attention. They think that if the mate is purebred, then it’s perfect. However, that’s not always the case.

When you think about studding your dog, you should choose a mate to complete your dog and vice versa, not just a purebred mate.

You need to know what are the flaws in your dog and search for a mate to complete those flaws. You also need to check the dog’s whole heritage because you can’t decide whether the mate is good enough by just looking at it individually.

For example, if you need puppies with blue eyes, you should look for the blue eyes in the family of the mate to make sure that blue eyes run in their family and not just a feature in this specific dog.

It’s very important to check both dogs’ health before going through the mating process. You don’t want the puppies to be born with hereditary health issues.

Then, both dogs should go for a total check-up by your vet. You might also do a genetic traits test to provide you with sufficient and detailed information about the dogs’ genetics.

A handshake agreement with the owner of the other dog is not enough. In fact, it can lead to many issues between both of you.

It’s better to consult a lawyer to write a stud agreement and avoid the chances of possible problems happening. The stud agreement should include a stud fee, what to do with the puppies, and what paperwork (proof of heritage, for example) is required.

I have a guide on the paperwork needed for breeding French Bulldogs here that you should check out.

When agreeing on this contract, everyone should sign it and receive a copy. This way, you can guarantee that everyone is happy and on the same page, to prevent any misunderstandings or problems in the long run between you and the other owner.

How to Stud Your French Bulldog?

The mating process for French Bulldogs is complicated and risky as they cannot mate naturally. If you’ve chosen a suitable stud for your French Bulldog and done the necessary tests, then you’re ready to go through the process.

Here are answers to the most common questions about how to stud your French Bulldog and its mating process in general.

When to Mate Your French Bulldog?

French Bulldogs become fertile at 6 months old; however, it’s recommended to mate them when they’re at least 1 year old to give their body enough time to develop and reach full sexual maturity.

Before you stud your French Bulldog, you have to make sure that his age is suitable for mating. Don’t mate your dog when it’s too young or too old; otherwise, the process will be difficult and will cause many health issues.

What Is the Best Way to Mate French Bulldogs?

French Bulldogs cannot always mate naturally because of the way their bodies are built.

Their front side is heavier than the back side, and their head is relatively large, which makes it very difficult for the male dog to mount the female dog, causing her to collapse during the mating process.

The mating process also takes a long time, which puts both male and female dogs at risk of overheating and other health issues.

The breeder might be able to assist the dogs throughout the process, but artificial insemination is often considered the safest, easiest, and most effective way to mate French Bulldogs.

How to know That The Mating Process Is Done?

You are going to know that the French bulldogs are done when you see them tied together from their back.

This is referred to as “Copulatory Tie,” and it happens when the bulbus glandis (part of a male dog’s organ) start swelling to lock the semen inside the female and enhance the chance of fertilization.

What to Do After The Mating Process Is Over?

After they mate, you should separate them. Make sure that they don’t have the opportunity to mate again with any other dog because, at this phase, the heat will continue for several days.

Take care of the food you are giving to them, especially the female dog, as they will need to eat a high-quality diet and take supplements and vitamins to help in puppy development.

Breeding the French Bulldog is considered a profitable and great investment of money as breeders earn around $14,000 to $20,000 for a litter of puppies.

However, if you plan on starting a breeding business, you need to have enough experience and resources to ensure that the puppies will be healthy. You also need to understand the laws and ethical practices regarding breeding dogs.

How much Is a French Bulldog’s Stud Fee?

The average fee for a French Bulldog Stud Dog is $1500. However, it depends on some factors, such as:

How to Sell French Bulldog Sperm?

Selling French Bulldog semen is not very complicated as long as you know what to do. Here are the steps you need to follow:

Collecting your French bulldog sperm can be done without any need for a female Frenchie. You will only need the following:

Make sure to wear gloves throughout the entire process of collecting the sperm. The towel will act as a stimulator for the dog, and you can squeeze out the semen by using the cup. Once you finish, put the semen in the plastic bag and seal it.

French Bulldog’s sperm can survive for 48 hours at room temperature, which is usually enough time for you to inject it into the female dog.

However, if you’re transporting the semen or shipping it somewhere far, it might take longer than 48 hours. So, it’s better to freeze your French Bulldog’s sperm.

Even though frozen sperm can last significantly longer than fresh sperm, it won’t be as effective. Statistically speaking, 40-60% of the sperm will survive the freezing and unfreezing process, and only 50% is enough to make the female pregnant.

If you don’t know how to handle freezing sperm at home, there are specialized places that do it for you. It costs around $445 to freeze the sperm and $85 for storage per year.

Finding a Buyer and Shipping the Sperm

Once you find a buyer, you will need to transport or ship the semen to them.

You can mail it, but make sure you are preserving it in a dedicated container with a suitable environment to keep the sperm alive for 48 hours. Shipping companies usually charge $150 to $250 for this service.

Can French Bulldogs Give Birth Naturally?

French Bulldogs can give birth naturally. However, natural birth is very risky for the health of the mother and the puppies. So, it’s best for French Bulldogs to deliver their puppies through a C-section instead to avoid any complications and ensure that the puppies are delivered safely.

Breeding French Bulldogs is expensive. That is because they cannot always mate naturally and rely on costly medical procedures such as artificial inseminations to get pregnant. They also need C-sections to give birth without complications. 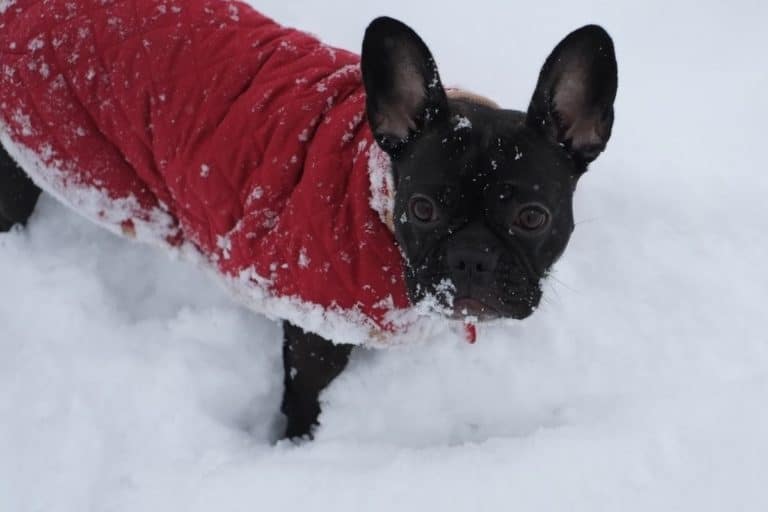 This post contains affiliate links and I will be compensated if you make a purchase after clicking on my linksFrench Bulldogs are one of the most beloved dogs in America….