You have a cute French Bulldog and you want to know when they can jump on the couch? When should they be allowed on the furniture? When is too soon to let them up there? When is it not okay at all?

If you are a new Frenchie owner, these are all very important questions to know the answers to, because, unlike other dogs, jumping and even going up or down the stairs are challenging for Frenchies, and if done too early or wrong, the dog may be seriously harmed.

So, when can French Bulldogs jump on couch? French Bulldogs can jump on the couch when they’re 14 months old or older because that’s when their bones, joints, and muscles are developed and strong enough to make the jumps on furniture safe, and even still, you should train your Frenchie how to jump safely so they don’t trip or fall and get hurt

To understand why jumping is a challenge for French Bulldogs, why is it hard for them, and how high can they jump as well as how to train them to jump safely, keep reading as we teach you how to train your Frenchie to jump safely.

Why is it hard for French Bulldogs to jump?

French Bulldogs are not built for jumping. Their stocky bodies, flat faces, and short legs make it not only difficult for them to jump, but also dangerous.

It can be quite harmful to French Bulldogs to jump because are highly susceptible to back, leg, and spinal problems including hip dysplasia, patellar luxation, intervertebral disease, and soft tissue injuries.

French Bulldogs can get injured while jumping even when jumping short leaps such as on your furniture, so it is important that you wait until they are physically mature enough before allowing them to jump at all.

When can French Bulldogs jump?

French Bulldogs can safely start jumping at 14 months old when their bones, joints and muscles are stronger. Even then, it is important that you train your Frenchie how to jump safely by slowly increasing the height of the furniture they are jumping on until they are comfortable with a taller surface.

How high can French Bulldogs jump?

French Bulldogs can jump as high as 44 inches (or 115 cm) but some will be able to do even more with practice and training.

When you start training your French Bulldog how to jump safely on the couch and other furniture, make sure they are jumping on a piece of furniture that doesn’t have sharp or pointy legs.

Sharp edges could cause serious injury if your Frenchie slips or falls while jumping.

How can jumping hurt French Bulldogs?

Jumping can hurt French Bulldogs quite a bit, and Frenchies usually get injured due to jumping on surfaces that are too high or due to slipping and falling when trying to jump.

Here are some of the common problems Frenchies can suffer when they’re injured while jumping:

While French bulldogs are genetically prone to hip dysplasia, it can also occur as a result of an accidental injury, such as jumping. It’s a skeletal problem that affects the hip socket and can be excruciating; it has the potential to cause arthritis.

Your Frenchie may have hip dysplasia if you notice any of the following symptoms.

By the way, limping isn’t always a sign of hip dysplasia, and you can learn about the reasons why your Frenchie is limping here.

The condition, which is caused by over-extension of the knee joint, occurs when a dog’s patella luxates (falls out) and causes instability in the hind legs. The frequency of patellar luxation varies from 1% to 7.9 percent among French bulldogs, depending on gender and breed.

The particular breed is more susceptible to this problem because their legs are located inwards, which can result in an abnormal angle at the knee joint and also cause patellar luxation. When your Frenchie’s kneecap slips out from its normal position, it leads to irregular wear-and-tear on the cartilage and bones, which can cause pain.

Your Frenchie may not demonstrate any symptoms of a dislocated kneecap since it isn’t always easy to spot. It’s conceivable that your veterinarian only identifies it during a regular check-up. The treatment choices include:

French Bulldog puppy jumping may also cause canine intervertebral disc disease (IVDD), which is a condition in which the discs between the vertebrae are damaged. It occurs as a result of stress to the spine.

The disc in your Frenchie’s back can herniate or burst, causing inflammation and excruciating pain – the disc will no longer absorb shocks from leaping or be able to weight bear.

It’s possible that your French Bulldog is suffering from it if they show any of the following symptoms:

If your French Bulldog’s back was injured while leaping and he has been diagnosed with canine intervertebral disc disease, the therapies he receives will differ based on his condition. They are as follows:

While there are a variety of causes for your Frenchie’s lameness, many of them can be attributed to soft tissue damage. Muscles, ligaments, and tendons can all be damaged as a result of sprains and strains.

The only other scenario I can think of where you may see your Frenchie in pain after leaping is a break in their leg. The following are signs of a leg fracture or break:

Should you let your French Bulldog Jump?

Due to how risky it is for your Frenchie to Jump, you really should not allow your Frenchie to jump at all, even if they are old enough to jump safely, it only takes one ba jump and one injury to cause the pain.

So, you should indeed train your French bulldog to stop jumping, and here is how to do that.

How to train your French Bulldog to not jump

If they do Jump, they may end up injuring themselves it will cause them pain that could’ve been simply avoided

The easiest way to train this behavior is by preventing the jumping in the first place through proper training techniques such as rewarding for sitting instead of jumping.

One of the most common injuries in French Bulldogs is Canine Intervertebral Disc Disease, which can cause your Frenchie to be immobile for days, weeks, months, or even more.

Signs of Hip Dysplasia in Dogs 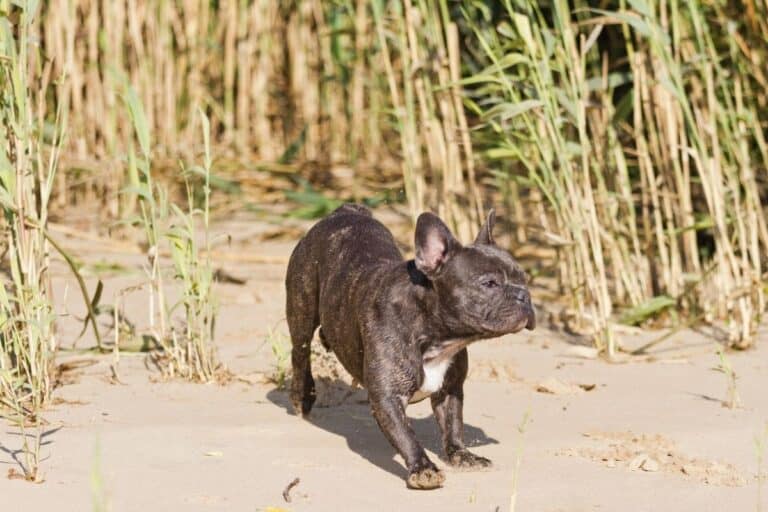 For most people, seeing bulldogs on skateboards is likely to be too fascinating to believe. Bulldogs have a short, stocky, muscular physique with a low center of gravity, which allows… 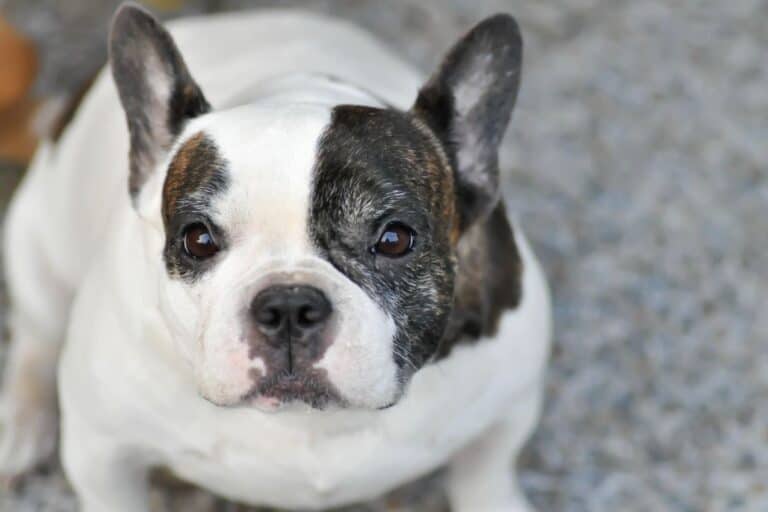 If your dog is continually snarling, snapping, or attempting to bite at other people or dogs, it is clear that he or she has a significant behavior problem. One of… A Frenchie is an excellent choice if you want a lap dog who will sit with you while you watch TV and then go for a run in the park,…

Does your bulldog seem to follow you everywhere you go? It all seems cute and nice until you can’t even have a minuter to check Twitter in the bathroom without…