The signature bat ears of French Bulldogs are one of their most distinct features, and I’ve seen way too many Frenchies’ owners that just can’t wait for their puppies ears to stand up, and are actually taken aback and even shocked when their ears go back down or curl backward.

The thing is, it’s not really something you should worry about, and definitely not something to panic about at all. Your Frenchie is still just as healthy and just as awesome.

But, why are you French Bulldog Ears Curling Back? Your French Bulldog ears can curl back during their teething period as their ear cartilage becomes weaker and their body redirects its supply of calcium to making teeth, or it can curl backward later in life due to injuries, about 90% of Frenchies will have their ears stand up again later.

So, as you can see, it’s not something you should worry about at all, and there are things you can do to help them stand up again.

Why Do French Bulldog Ears Curl Back?

Your French Bulldogs’ ears will not always be standing up, and their position will change not only based on their age and health, but also in their mood. Your French Bulldog’s ears will usually curl back when they are in a playful mood to indicate that they are excited and enjoying themselves, but an injury may also cause them to curl back temporarily.

The only way to know for sure why their ears are curling back is to do some investigation yourself.

How to know why your Frenchie’s ears are curling back:

Speaking of injuries and stairs, in particular, this is something you should probably learn more about to avoid in the future. You can learn why French Bulldogs have problems with stairs here.

Now, let’s talk about what does it mean for their ears to curl back, fold, or go down.

Is it normal for French Bulldog Ears to Curl backward?

It is completely normal for French Bulldogs’ ears to curl backward, go down, or even become floppy. French Bulldogs’ ears can go down during their teething period but usually stand up later again after their adult teeth develop, or it may go down later in life due to injuries or another issue.

French Bulldogs are also very expressive dogs with their facial features, including their ears, so they will move their ears to express how they feel, and this will include curling back their ears when they are excited and in a playful mood.

When will your French Bulldog Puppy’s ears stand up again?

So, if your Fenchies’ ears never go back up again, it should not be something that you are concerned too much with. It usually goes up and down on its own. You can learn more about why are French Bulldogs’ floppy ears completely normal here.

What can you do to help your French Bulldog Ears to stand up again?

There are a few things you can do to help your French Bulldogs’ ears stand up again, but they do not guarantee that their ears will stand up.

Give Them Foods rich in calcium

Some dog owners claim that goat cheese is the best source of calcium for dogs, but there is no scientific proof of that.

Start small, give them just one spoon of yogurt with their dinner to check if they are okay with it, and keep an eye on them for the following 24 hours. Some dogs can have a degree of lactose intolerant and the symptoms can vary from small things like being slightly lazier than normal to rashes to vomiting and diarrhea, and if you notice any of these signs, you should take them to the vet.

Speaking of allergic reactions, you should check out my guide to rashes on French Bulldogs here to find out what can trigger your dog’s allergies and avoid them, and – more importantly – to learn what you should do in case of a rash.

Some bloggers, YouTubers, and even friends can tell you to give your dog more calcium with the help of over-the-counter calcium supplements, but I would highly advise against that.

Some dogs can have strong reactions to calcium supplements and you should not give them to your dog without your vet’s advice. If you want, you can take your dog to the vet and talk with them about those supplements, maybe they will recommend them and maybe they won’t, it depends on your dog’s health, age, and other factors.

So, while I would recommend against using calcium supplements, I can actually suggest you try out joint supplements since they are helpful to things other than teething and they are completely safe to use.

There are plenty of them on the market, and while it’s still best to get your vet’s advice, you can get those two based on my own vet’s advice.

He recommended these two for my Frenchies:

You can Tape them temporarily

personally have not done it, and I’ll explain why. My Frenchies ears didn’t go up until they were around 13 or 14 months, I believe, because I didn’t really care much for it to take note of when exactly it happened.

Here is a simple video showing how it’s done:

Your French Bulldogs’ ears will change positions during their lifetime, it’s always a guarantee. They should have their ears already up by the time they’re separated from their mothers and taken home by new parents at around 8 weeks, but some Frenchies’ ears will not stand up until much later, usually around 15 weeks.

You can check out the timeline of Frenchies’ ears development throughout their lives here.

Around 90% of Frenchies will have erect ears by the age of 8 months old, but some may need some help with one or both ears. Yes, they can have one floppy ear and one erect ear at some point in their life.

Frenchies are also very expressive with their face and ears, so you will need to understand what those slight ear movements say as it can help you understand a lot more about them. You can start by learning how they express aggression in my post on why some bulldogs become suddenly aggressive here.

How do you help a French Bulldog’s ears stand up?

Why are my Frenchies’ ears folding? 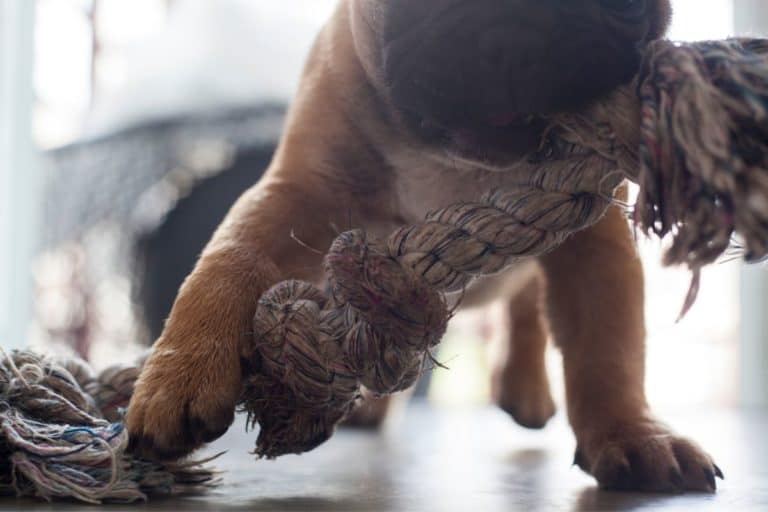 French Bulldogs have very sensitive and irritable skin that makes them prone to various skin conditions. This often results in the formation of bumps on their skin Most kinds of…