When you think about it, English Bulldogs are big dogs, yet at the same time, small, does that ever come to your mind?

If you have an English Bulldog (or not but you’re interested in them) you’ll find yourself wondering when do they grow up to reach their normal signature size with their big heads and droopy lips.

So why is my English bulldog’s head small? Your English Bulldog’s head may be small due to several possible reasons including them not reaching the 5 month age mark, their bodies keep changing until they reach 1 and even 3 years old, or the fact that females have smaller heads than male English Bulldogs.

Keep reading to find out why your English Bulldog’s head is small, when do they fully grow, and how they’re supposed to look like when they’re fully grown according to the breed standards

Why is My English Bulldog’s Head Small?

English Bulldogs have a signature, hard to ignore appearance, you’ll know the breed right away when you see them, with their sturdy look, wide shoulders, and big heads, they are hard to go unnoticed.

There is a reason why you see that your English Bulldog’s head is smaller than other bulldogs when you compare the two; first things first, you must know that female bulldogs have smaller heads than males, making that a possible reason why.

Another reason is that your bulldog may be suffering from dwarfism or achondroplasia which makes them as they call “miniature bulldogs” or “TeaCup Bulldogs”.

You might also be thinking about it far too soon, as the physique of this breed is continuously developing; they typically reach shoulder height in 4-5 months. Their bodies grow at nine months, and their heads, chests, and shoulders begin to develop, which continues until they are three to four years old.

The bulldogs’ skulls should be enormous in size and diameter. The dog’s skull should be in front of his ears and at least measure his height around the shoulders.

Bulldogs have a wide and square appearance. They should have a flat, not rounded or domed, forehead.

When viewing the bulldog from the side, the bulldog’s head must look to be elevated. From the tip of the nose to the rear of the skull, the head seems to be short.

When fully matured, English bulldogs have a tough appearance. They have a robust build and have the appearance of a combat dog.

They have a big head, chest, and are short in stature. Their appearance and physical features do come with a hefty price of potential health issues, which is why English Bulldogs don’t suit first-time dog owners very well.

For one example of why this is so, check out my guide to why slip leads are not okay for Bulldogs here.

When do English Bulldogs’ heads grow?

English Bulldogs’ heads grow until they reach shoulder height at the age of 4-5 months old, after which their bodies broaden and their head, chest, and shoulders begin to develop when they are nine months old. They continue to develop until they are 3–4 years old.

The head is wide and square when viewed from the front. From the occiput to the tip of the nose, the head appears high and fairly short in profile. The brow is never rounded or domed, and it is never excessively prominent or overhanging the face.

The broad, square, and high temples (frontal bones) create a deep furrow that runs from the stop to the center of the skull. Between the eyes, there is a deep, broad depression that serves as a halt. Beyond the eyes, the well-rounded cheeks extend sideways and outward.

From the corner of the lower jaw to the apex of the skull, the skull seems to be rather big in diameter.

What is the normal size for an English Bulldogs’ head?

The normal size for an English Bulldog’s head circumference in inches is 21-24”. The sturdy breed has one of the largest head sizes compared to other breeds.

When viewed from the front, the head is broad and square. The head appears high and short in profile from the occiput to the tip of the nose. The brow is never rounded or domed, nor is it prominent enough to overhang the face.

What is the size of an adult English Bulldog?

The weight of fully grown English bulldogs varies depending on their gender.

Their small stature gives them the appearance of being lighter than they are. You can’t just pick up an English bulldog-like you can other dogs of comparable size. They’re also generally too big to fit comfortably in a lap.

When it comes to adopting an English bulldog, their weight might be a significant consideration.

How Do English Bulldogs Look When They’re Fully Grown?

When fully matured, English bulldogs have a tough appearance. They have a robust build and have the appearance of a combat dog. They have a big head, chest, and are short in stature.

Their skin is wrinkled, and they have wrinkles on their faces. Male and female English bulldogs have different heads and bodies.

Bulldogs, despite their appearance as combat dogs, are incredibly gentle and kind. Bulldogs get along well with children and are therefore more of a family pet.

They enjoy being about the house and playing with their children. Male and female bulldogs have distinct appearances.

Idiopathic head tremors are the most common cause of head tremors in Bulldogs. However, illnesses like canine distemper, Neurospora, and other parasitic infections, and calcium deficiencies can also play a role.

Cerebellum injury, consumption of poisons or certain medications, hypoglycemia, hypocalcemia, and renal issues are all possible causes of head tremors in Bulldogs.

Take your Bulldog to the doctor for a checkup if you see him shaking his head frequently. While most occurrences of head tremors in Bulldogs are idiopathic, it’s important to screen out any underlying medical conditions first.

Idiopathic head tremors can affect any dog breed, including mixed breeds. Bulldogs, on the other hand, are more affected.

Before we get into the related questions, you may also want to check out why some French Bulldogs are so stubborn here.

Will my English Bulldog’s head get bigger?

Your English Bulldog’s head will get bigger as they age; this breed’s body is constantly changing; In most cases, they reach shoulder height in 4-5 months. When they are nine months old, their body expands, their head, chest, and shoulders begin to develop and continue developing till 3–4 years old.

Why is my English bulldog small?

Your English Bulldog is small due to many possible reasons including them suffering from dwarfism or achondroplasia for which they are called Miniature English Bulldog or Teacup Bulldog; they are purebred Bulldogs with puppy-like looks and mature proportions that are smaller than the breed standard.

At what age are English Bulldogs fully grown?

English Bulldogs are fully grown in regards to height at the age of one year old, although they may continue to grow bigger in chest size, head size, and shoulders keep developing while they gain weight until they’re around three to four years old.

How long does it take for a bulldog to fully grow?

A bulldog will be fully grown at 12 months and considered an adult, hitting their peak growth. They will continue to grow for 6 months after turning 1 year old and until they reach 3 . Male bulldogs grow to be about 50 pounds and 16 inches tall, and females about 40 pounds and 14 inches tall.

Do Bulldogs get wrinkles as they become older?

The creases on most Bulldogs’ faces from the age of 12 months and up will last for the rest of their life. Some owners, however, have noticed that their elder Bulldogs’ wrinkles are deepening. In reality, it is debatable. While some Bulldogs do not get more wrinkles as they age, some do.

At what age do Bulldogs stop growing?

It takes around three years for a bulldog to reach full maturity. They reach numerous milestones around the age of a year and can be called adults, with most of their growth halted. Bulldogs have a shorter life than most other dogs of similar size, with an average lifespan of 8 to 10 years.

The Miniature English Bulldog: Here’s Everything You Want To Know Any pet owner knows that coyotes are a genuine threat to our dogs and cats, especially if you live in a rural area, and any encounter that our dogs can… 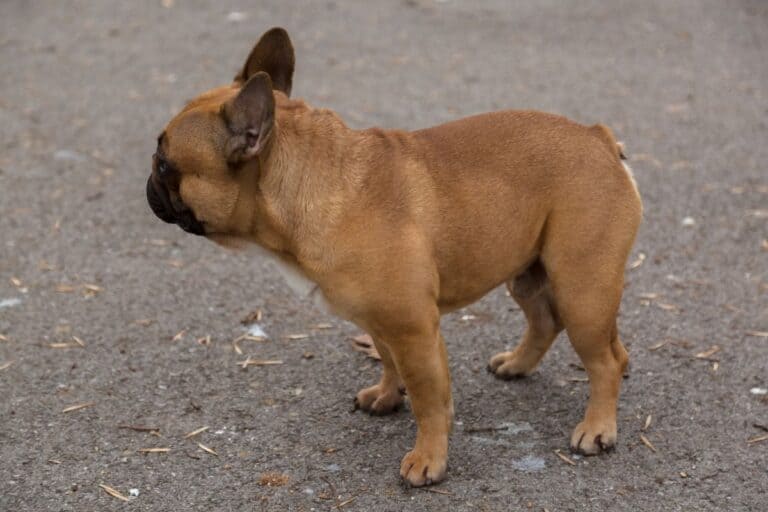 French bulldogs cannot reproduce easily on their own as they are faced with various challenges during their pregnancy. That’s why they are commonly referred to as a man-made breed because… Bulldogs are considered a people-oriented breed. They are very attached to their owners and love spending almost all the time with them.  However, some dog owners might have to leave…